Electric cars are becoming more popular and accessible, especially in British Columbia. A recent report revealed that BC has seen a 5% growth in 2019. Currently, electric cars make up 9% of new car sales in the province, according to Vancouver Sun. Nearly half of which is made up of Tesla vehicles.

With many manufacturers offering affordable alternatives, and the province providing many incentives to consumers, drivers have become more inclined to invest in a cleaner, guilt-free vehicle. 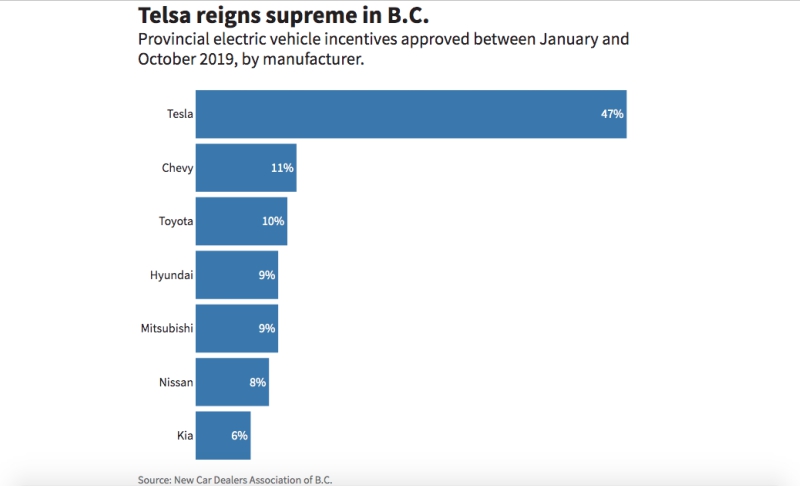 A recent report from New Car Dealers Association of B.C. showed that 47% approved electric vehicle incentives went towards Telsa-made vehicles. Rounding off the list, Chevy, Toyota, Mitsubishi, Hyundai, Nissan, and Kia all made a splash but did not hold a torch to the sales Tesla had in 2019. Unfortunately, we have not seen a breakdown of which Tesla models were most popular. However, one can imagine that the Model 3 was a popular purchase due to its lower price tag.

Roughly 30,000 electric cars are driving on the roads across the province of British Columbia as of 2019. This has been a slow, yet steady initiative the provincial government has been seeking out over the past decade. The province offers a slew of incentives to sway drivers to go green. These incentives can equate to $16,000 off the purchase price of a new electric vehicle.

The iZEV program, which is managed by Transport Canada, offers up to $5,000 off new battery-electric vehicles, $2,500 to $5,000 on plug-in hybrids and up to $5,000 for hydrogen fuel cell vehicles. The provincial program in BC offers up to $3,000 off a new battery-electric vehicle, up to $1,500 off a plug-in hybrid and up to $3,000 for a hydrogen fuel cell vehicle. Finally, the SCRAP-IT program offers incentives for up to $6,000 towards a new vehicle and $3,000 towards a qualifying used electric vehicle.

We’ll patiently wait and see if Tesla’s Cybertruck makes a big impact when it releases later in 2022.