Although Tesla’s shares were up 1.5% in today’s premarket trading after closing more than 1% higher the day before, Miller Tabak’s chief market strategist Matt Maley has told CNBC News that investors should consider how volatile Tesla has been over the last five to seven years before thinking about buying the stock. 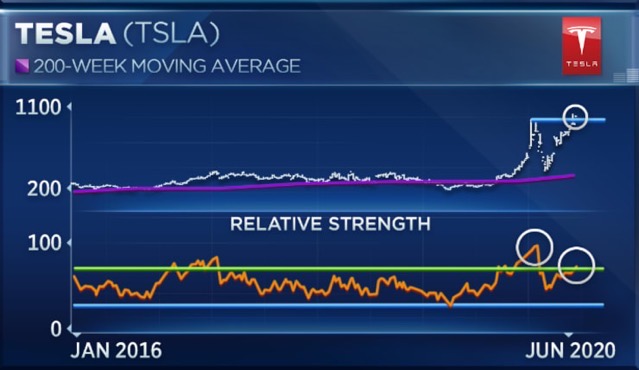 “It’s getting very overbought,” Maley said while referring to its relative strength index. “It’s not as overbought as it was in February, but to bet that it’s going to get to [an] even more extreme overbought condition is a dicey proposition.”

Maley highlighted that Tesla is doing something that typically precedes its pullbacks i.e. trading at a 200% premium to its 200-week moving average.

“That’s basically where it got to right before it topped out in February,” he said. “This is a stock that’s had more than 20 … pullbacks of over 20% over the last seven years. That’s more than three a year.”

And while he acknowledged Tesla was a “great company” and could reach Jefferies’ $1,200 target in the near term, Maley saw a pullback as virtually unavoidable.

“There’s nothing wrong with trading for the next 20%,” he said. “But with the amount of pullbacks it’s had, I think if you want to load up the truck, you want to wait for the inevitable pullback because we’re going to see one.”