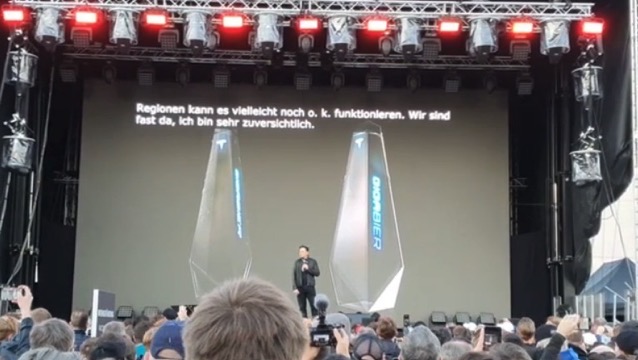 Musk told the audience that Giga Berlin needs 12,000 jobs or more, as Tesla needs “great talent to come here from all around Europe, to help us create the new future.”

The Tesla CEO further said that the company will “replant many more trees than removed” and use a minimum amount of water. The goal is to have 100% renewable energy as the source for the factory, later said Musk.

Giga Berlin will have world’s most advanced paint shop, with more layers of stunning colors that subtly change with curvature

When asked about Cybertruck, Musk said they’d try to bring it across to Germany, or make a smaller one if that was possible.

“There’s going to be a special crimson. The way you do the colours is important. You need to have a multi-layer paint system that’s gotta be designed into the paint. It’s more than just a color…you want dimensionality to the paint, which is only possible if you have multiple layers,” said Musk, again hyping up the Giga Berlin paint shop.

Musk also noted that Giga Berlin will have graffiti murals throughout the factory.