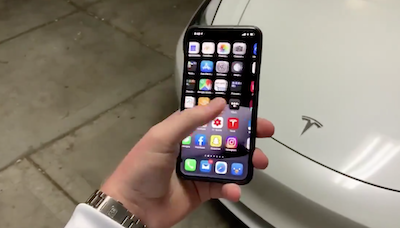 Quinn Nelson from Snazzy Labs has shared a cool hack on Twitter that allows Tesla owners to open their vehicle’s front truck using Siri Shortcuts and an NFC tag.

Life hack for your @Tesla: Use Siri Shortcuts and an NFC tag to open your frunk! pic.twitter.com/kQLQJAHVzV

Tesla Models 3 owners know in order to open their car’s front trunk, they need to first get inside the car and hit the in-dash ‘open frunk’ button. Another way to do it to first unlock the iPhone, fire up the Tesla app and hit the unlock button.

As you can see in the video, Nelson has shown that even though this can be achieved by simply saying “Hey Siri, open the frunk” as well, it’s even snappier to do it by using a Siri Shortcut paired with an NFC tag, as iOS 13 now supports the latter.  He also notes that the method works like a charm even when the iPhone is locked. This method of tapping your iPhone close to the tag is hand if you need to open the trunk, but your hands are full.

Do share your thoughts with us about this cool Tesla hack in the comments section below.