So far, Tesla has only allowed the Canadians to order the software-limited 151 km range Model 3 via telephone but now, the folks over at Tesla North have spotted that the option to order this Standard Range version has also been made available online. 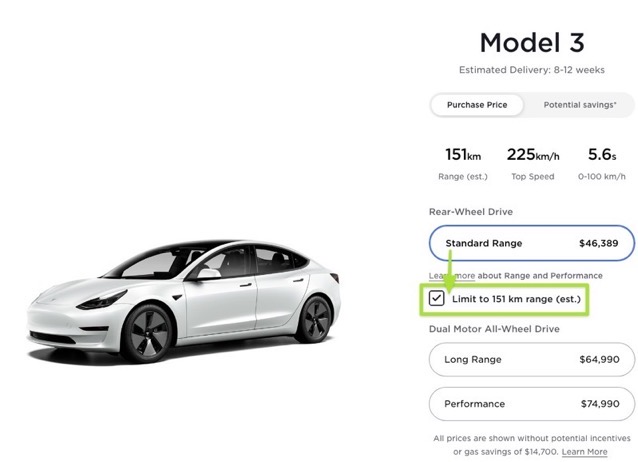 The Tesla website for Model 3 is also showing a tick box that reads, “Limit to 151 km range (est).”

Available to order for $46,389 CAD before provincial and federal rebates, this Standard Range version is, however, generally not recommended given its limited range, which would be cut even shorter in a Canadian winter.

But with provincial and federal rebates available, it may be a cheap way to buy a Tesla, if you’re willing to take the risk.

The indication on Tesla’s website of a software-limited 151 km range Model 3 most likely is to satisfy Canada’s iZEV rebate program, which offers a $5,000 CAD rebate on electric vehicles.

Tesla has also raised the prices of its Model 3 and Model Y in the U.S., whereas the Model 3 sedan now comes with a matching door trim interior, as first found in vehicles made at the company’s Gigafactory in Shanghai, China.