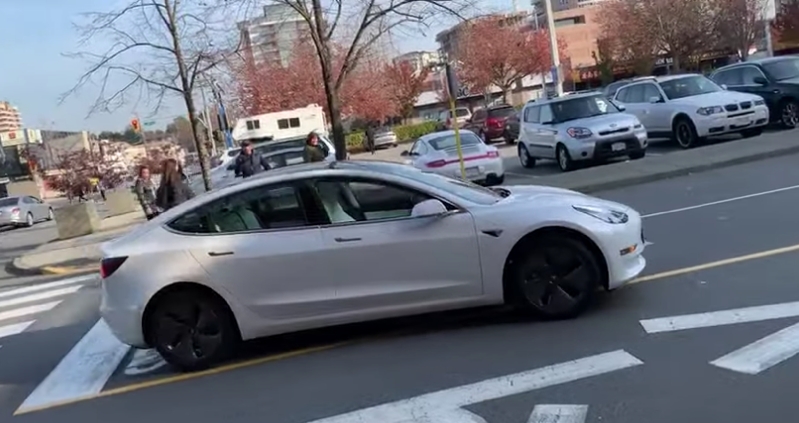 Last month, Tesla released its V10 software update which launched the Smart Summon feature in Canada, allowing owners to have their vehicle automatically navigate to their location in a parking lot.

The sight of a self-driving Tesla in a parking lot can still be a shocking sight, especially for those unaware of the technology available. This was especially the case recently at the CF Richmond Centre parking lot in Richmond, B.C.

Tesla’s Smart Summon technology even confused the Richmond News, which reported claims of the “rogue” Tesla Model 3 driving by itself “being controlled from a different mall.” Tesla’s Smart Summon feature can only work when the driver is up to 200 feet away and within line of sight. Tesla owners control their vehicle using the car’s app on their smartphone.

A reader of the newspaper claimed she saw a “Tesla Model S” (it was actually a Model 3) driving by itself through the mall’s east parking lot, causing confusion. Mall patrons are seen taking photos and videos of the Tesla navigating by itself, while at one point a security guard came outside to chase after the electric vehicle.

“The owner showed up and the car stopped. Eventually, the owner got in and drove away,” explained Swimmy She.

Video footage shows the Tesla navigating in the oncoming lane towards the mall’s covered parkade, which is usually always busy and probably not a good time to use Smart Summon. At least the Tesla signals when it tries to go back to the right lane as a vehicle approaches from the rear:

The last video shows the apparent owner of the Tesla Model 3 putting something into the trunk, and then driving away, according to Richmond News.

Driving in Richmond is life-threatening and stressful enough as it is. The Tesla owner’s decision to use Smart Summon at this busy mall probably wasn’t a good idea.