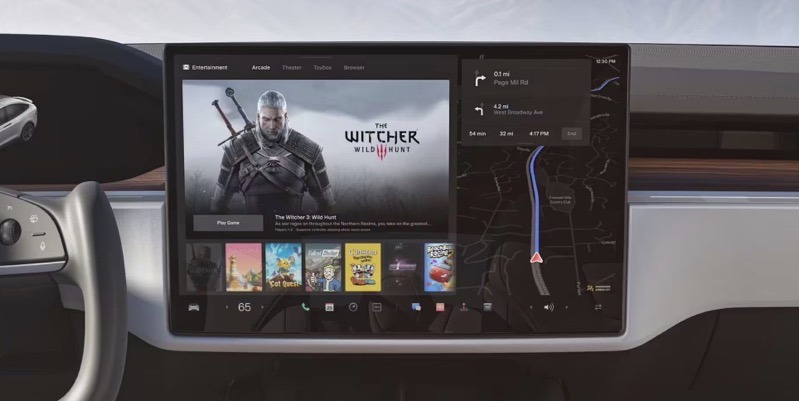 If you thought your Steam library couldn’t get any more portable than the Valve Steam Deck, just wait until you can play your favourite games on your Tesla’s center console.

The company has been working on bringing PC gaming to for quite some time now, and it looks like they’re finally getting close. “Demo probably next month,” Musk added.

A recent Tesla software update even added support for multiple controllers via Bluetooth to enable multiplayer modes in games, so a Steam demo may not be too far off after all.

Gaming on a Tesla makes more sense than one would think. Tesla needs quite a bit of computational horsepower under its hood to enable Autopilot, Full Self-Driving, OTA updates, a host of connected features, and more, not to mention power the Media Control Unit (MCU). That computation muscle translates quite well to gaming.

All of Tesla’s newer models are equipped with pretty powerful AMD Ryzen chips that feature the company’s RDNA 2 graphics — the same as the PS5, although the chip powering Sony’s console is custom-built by AMD.

Nevertheless, the Ryzen chip in Tesla’s electric cars is more than capable of playing a wide range of PC titles. Tesla launched Tesla Arcade in 2019, bringing some casual games to its cars. However, making AAA games (and more) playable on a Tesla would take things to the next level.

Tesla CEO Elon Musk has sold 7,924,107 shares of his company worth nearly $6.9 billion, saying he might need the cash in the unlikely event that he is forced by the court to close the Twitter deal, Tesla North is reporting. Musk sold the shares on August 5, August 8, and 9, according to the SEC...
Usman Qureshi
7 days ago

Twitter has said its less than stellar second-quarter financials are a result of ongoing uncertainty around Tesla, SpaceX CEO Elon Musk's proposed $44 billion USD acquisition of the social media company — reports The Guardian. The company reported $1.18 billion USD in revenue for Q2, down 1% year-over-year. Twitter attributed the decline to "advertising industry headwinds...
Nehal Malik
4 weeks ago