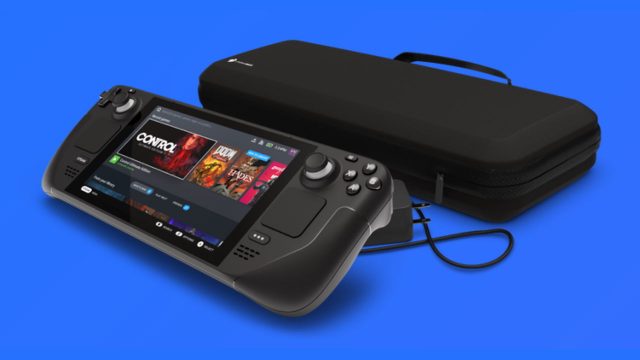 The handheld (which has echoes of several portable gaming rigs of years past) features a seven-inch screen and runs on a quad-core Zen 2 CPU, coupled with AMD RDNA 2 graphics and 16GB of RAM. Storage runs 64GB to 512GB, and the built-in storage can be augmented via microSD.

There are dual thumbsticks, two 32.5mm square trackpads, an analog directional pad, four main face buttons, triggers and a quartet of grip buttons, as well as gyro controls. The Steam Deck also has a headphone jack, stereo speakers, dual microphones and haptic feedback. It weighs around 669 grams and it’s just under a foot wide.

The Steam Deck will run games from players’ existing Steam libraries. Players will simply log into their account, and their friends and catalog should follow them onto the handheld. The Steam Deck is capable of running PC games on its own hardware, without the power of the cloud.

The next model up costs $659 CAD, and packs faster storage courtesy of a 256 GB PCIe 3.0 NVMe SSD; it also comes with an “exclusive Steam Community profile bundle.”

The top-tier Steam Deck, at $819 CAD, includes a 512 GB NVMe SSD that Valve refers to as “high-speed,” although it is still a PCIe 3.0 drive. In addition, this model’s screen features “premium anti-glare etched glass.” The unit comes with an exclusive carrying case and exclusive virtual keyboard theme, on top of the cheaper models’ bonuses.

Check out the Steam Deck Canadian pricing as per the company’s website–the mid and top tier models are expected to become available to order in Q2 2022:

Steam users will be able to reserve any of the three Steam Deck models (for a fee) starting at 1pm EDT on Friday, July 16 — as long as they made a purchase on the Steam Store at some point before June 2021. If not, they’ll have to wait until 48 hours later.