Tesla’s shares rose nearly 4% today to hit a record high and elevate the company’s market capitalization to $88 billion, a figure that is $2 billion larger than the combined values of General Motors and Ford, Reuters is reporting. 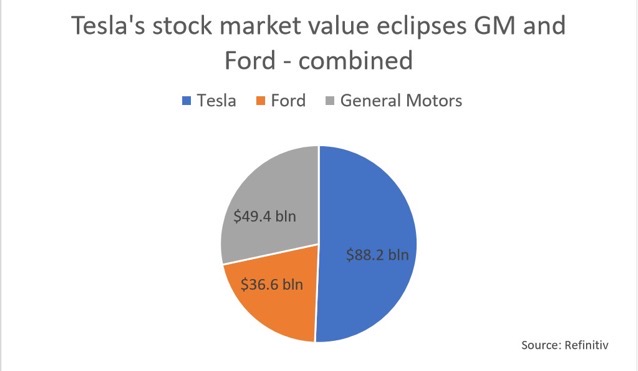 Tesla’s stock has nearly doubled in the past three months, thanks to the progress made by CEO Elon Musk which has allowed the automaker to outpace its long-established U.S. rivals in market capitalization.

To put things into perspective, GM and Ford each delivered more than 2 million vehicles in the United States last year, whereas Tesla has made worldwide deliveries of 367,500 vehicles in 2019.

Meanwhile, Argus Research analyst Bill Selesky has raised his 12-month price target on Tesla to a new high of $556 up from previous $396. Selesky’s new price target for Tesla has also made him the biggest bull among major Wall Street analysts.

“We are raising our 2020 EPS estimate to $5.96 from $4.40 to reflect improved economies of scale in 2020 production and delivery results and a better-than-expected ramp up of vehicles produced at the Shanghai factory in China,” Selesky said in a note to clients.

The analyst’s new target reflects around a 19% upside from where Tesla’s stock is currently trading.