According to a report by Tesla North, Tesla Model 3 Standard Range Plus units coming to Canada will allegedly be equipped with the company’s new lithium iron phosphate (LFP) batteries. 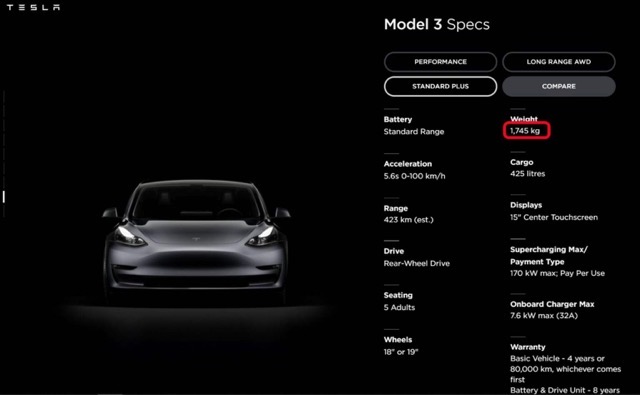 Citing a post on the Tesla Motors subreddit, the source points to a Model 3 SR+ order screen which displays the electric vehicle’s (EV’s) weight as 1,745 kg (3,847 lbs), while the U.S. version of the electric sedan appears to still be outfitted with nickel cobalt aluminum (NCA) batteries.

According to a comment on the post’s thread, however, the weight isn’t the only thing to look at when considering if the line of Model 3 SR+ units will include LFP batteries or not.

The company announced its plans last year to switch to cobalt-free batteries in China. While the electric carmaker will likely phase out the use of cobalt worldwide, it’s still being used for batteries in most markets.

Earlier this year, Tesla CEO Elon Musk also confirmed that all of Tesla’s standard range cars would be shifting to LFP batteries.

According to an update shared with Tesla North by developer Mike Gapinski, the latest Tesla app update for Android includes Apple CarPlay on board, requiring significantly less hardware to run. As shown in the video below, Tesla Android app version 2022.38.1 includes a few updates which make setting up Apple CarPlay even easier. The developer also pointed out...
Usman Qureshi
10 hours ago