With Porsche Taycan establishing a new 4-door electric car record at the track, Elon Musk last month announced that Tesla would be bringing a Model S to the Nurburgring race track with a 3-motor “Plaid powertrain” and a new “chassis prototype” which will prove that Tesla’s vehicles are still the highest-performing EVs available.

Now, Electrek is reporting that Tesla’s “Plaid” Model S has already crushed the Porsche Taycan’s Nurburgring time, although the time hasn’t been made official by the track. YouTuber and Nurburgring track spy Automotive Mike has also released a video showing updated Model S Plaid prototypes going crazy on the track. 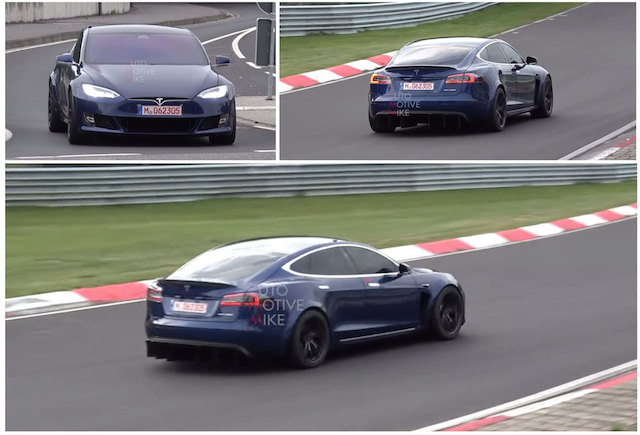 As you can see in the video, the two prototypes show wider bodies around the wheels, larger air intakes, and one of them has a very large diffuser in the back.

The video shows Tesla attempting some very hot laps and also doing some crazy maneuvers seemingly to test the handling. It’s not clear yet if Tesla is going to be able to attempt an official record time, but the automaker believes that an impressive 7:05 time is achieveable.

The Model S would become one of the fastest 4-door vehicles on the Nürburgring track.