Tesla Model Y Delivered in Canada to Vancouver Store, Looks to Be the First [u] 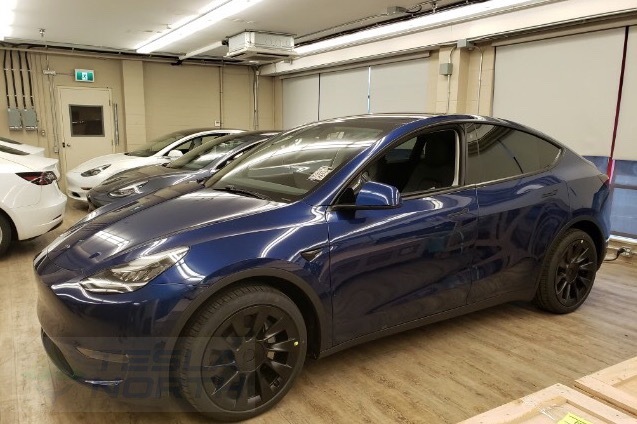 Tesla has delivered in what appears to be the first Model Y in Canada, to a store in Vancouver.

The vehicle in question is a Performance Model Y (without the extra Performance Option upgrade) with 20-inch Induction Wheels, according to a source speaking to Tesla North. The Blue Metallic Model Y was delivered on June 6, 2020, to a Tesla store according to the site.

Recently, Tesla started updating accounts online for Model Y reservation holders, informing them to fill out registration, trade-in and payment details. Earlier this month, a Tesla Store in West Vancouver confirmed the company was set to deliver Model Y in June, and now it appears that it has already happened.

Tesla has plans to deliver 1,500 or so Model Y electric vehicles in Vancouver for the month of June, notes the source.

The Model Y seen above costs $87,290 in Canada, as configured today. Tesla will begin its Standard range Tesla Model Y configurations in 2021. The delivery of a Tesla Model Y in Vancouver marks the first delivery of the compact SUV outside of the United States, which saw its own deliveries start back in March.

Vancouver Tesla advisors have been emailing reservation holders as of today. “Tesla Vancouver is expected to be receiving a limited amount of Model Y orders in the Month of June, by completing and submitting your profile it will speed up your delivery process and put you higher in the queue to get into your new Model Y!”, reads an email shared by a user on the TMC Forums. Other users have been assigned VINs for Model Y reservations in Quebec and Ontario.

Vancouverites, keep your eyes peeled for this blue Tesla Model Y as it should be on the streets soon.

Update: an update posted by the site indicates the vehicle was delivered to a store, but not an actual customer yet, however is slated to happen this month.