Thanks to the security video captured by their Tesla, a Langley, B.C. family has been able to recover their stolen RV, Global News is reporting (via TeslaNorth). Video from Tesla’s motion-activated camera system called the Sentry Mode showed a man on a bicycle ride away. 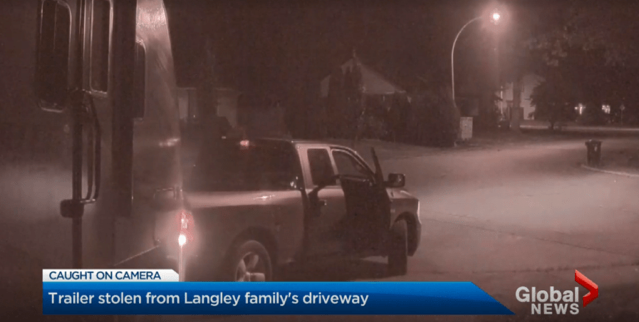 Derek, a member of the family who declined to be identified, woke up at 6 am to find the RV missing from the family’s driveway. “It was like waking up out of a dream, I wasn’t sure at first,” he said.

“I kind of saw nothing and couldn’t remember: did I actually bring it home? Am I waking up here? And 10 seconds later it hit me that it was actually gone,” he continued.

Video from the Tesla, which has a motion-activated camera system, showed a man on a bicycle ride into the cul-de-sac, then ride away.

“A few minutes later, a truck pulled in … slowly turned around, and then backed right up to the trailer. They fiddled around a bit and within two minutes it was on their truck and they pulled away.”

The trailer was later found by the police in a rural area of Agassiz, where they reportedly discovered several other potentially stolen trailers and other stolen goods.

Thanks to the video from the Tesla shared online, Global News reports an officer recognized the suspect’s truck, while other news tips also poured in after the video made its way online.