Tesla Launches ‘TeslaMic’ for In-Car Karaoke, But Only in China [VIDEO]

In celebration of the forthcoming Chinese New Year beginning on February 1, Tesla has debuted a new ‘TeslaMic’ accessory for its customers in China as part of the upcoming 2022.2.1 software update, Tesla North is reporting. 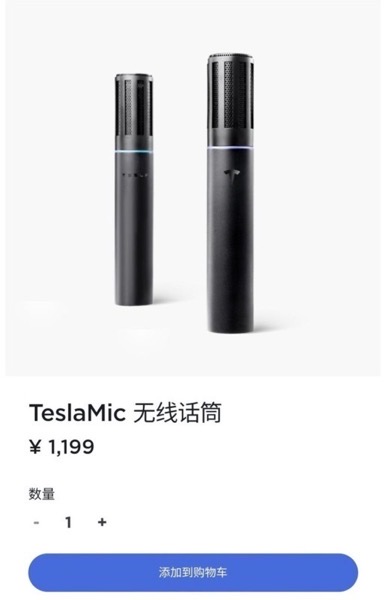 For roughly $188, you get two microphones that let you sing karaoke in your Tesla with KTV. Due to overwhelming demand for the microphones, however, the Tesla website is not loading the TeslaMic link at the time of writing.

The microphones come with blue and purple lights to distinguish them in low light. As of now, there’s no word if these will make it to Canada or the United States, although it was recently found that Tesla had filed trademarks to make headphones and other audio products.

Check out the video below above offering an overview of the 2022.2.1 software update and also a demo of these TeslaMics with KTV. Also returning is the Superchargers icon in maps, which was removed when the latest V11 software update was pushed out. Another China-only feature is the ability to change your Tesla’s color in the car, and have it synced to the Tesla mobile app.

As reported by the folks over at Tesla North, Tesla delivered its first production electric truck to the customer, PepsiCo, at its Semi delivery event on Thursday evening at its Gigafactory in Sparks, Nevada. At the event, CEO Elon Musk was also available for a presentation alongside Dan Priestley, Senior Manager, Semi Truck Engineering. Musk...
Usman Qureshi
2 hours ago

Tesla is preparing to add Dolby Atmos support to its electric vehicles (EVs) — reports Tesla North. An unnamed source told BGR that the automaker has been in talks with several major record labels for months now to bring Dolby Atmos to its vehicles. The tip comes right on the heels of a report from...
Nehal Malik
7 days ago