You Can Now Buy a Tesla with Bitcoin in the U.S., Other Countries Later in 2021 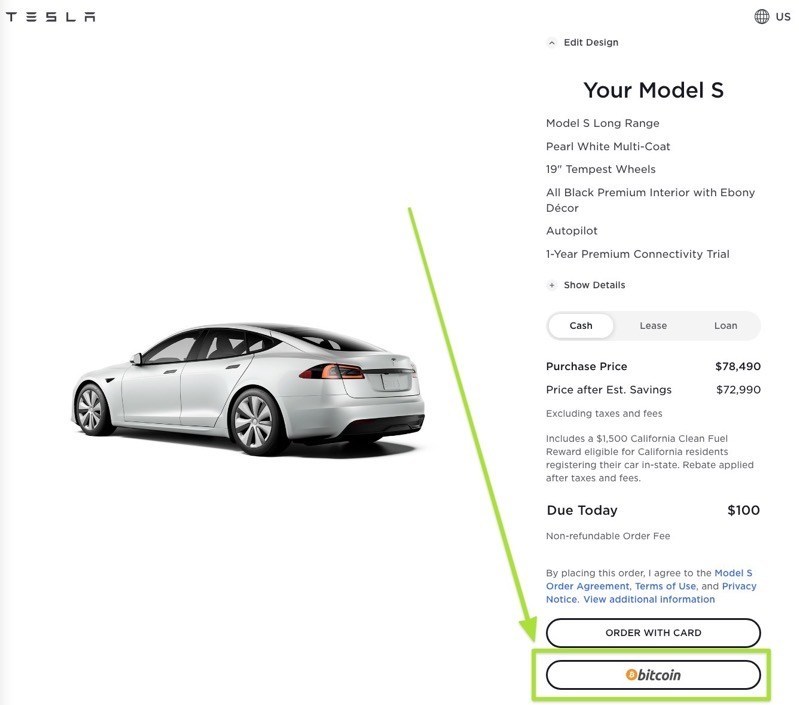 If you’ve been making millions off the cryptocurrency Bitcoin, maybe it’s now time to spend some of your windfall on a Tesla.

On early Wednesday morning, Tesla CEO Elon Musk announced you can now “buy a Tesla with Bitcoin” (via Tesla North) for those in the United States.

You can now buy a Tesla with Bitcoin

Musk added the ability to pay by Bitcoin outside the U.S. would be available “later this year”.

Back in February, Tesla revealed it had invested $1.5 billion into the cryptocurrency and said in the near future it would start accepting Bitcoin as payment. Six weeks later, Tesla has now implemented Bitcoin as a payment option, alongside Apple Pay and credit card in the U.S.

“Tesla is using only internal & open source software & operates Bitcoin nodes directly,” said Musk, adding, “Bitcoin paid to Tesla will be retained as Bitcoin, not converted to fiat currency.” In other words, Tesla will not be turning its Bitcoin into cash, but instead holding the cryptocurrency instead. Maybe Bitcoin will be the currency on Mars?

Bitcoin paid to Tesla will be retained as Bitcoin, not converted to fiat currency.

Bitcoins are limited in circulation with only 21 million expected to be available through an energy and time-intensive mining process. So far, only 18.6 million ‘coins’ are in circulation, with the mining process set to max out in the year 2140 (yes, well over 100 years from now). The richest person with Bitcoin holds over 143,000 coins worth $8.1 billion USD.

Pay by Bitcoin capability available outside US later this year

Earlier this year Musk recently added a Bitcoin hashtag to his Twitter bio, while also noting he was a “supporter of Bitcoin” in a Clubhouse app interview.

You can buy and sell Bitcoin in Canada with the Newton app–click here to sign up and get $25 free after your first investment over $100.

Disclosure: Newton is an affiliate partner of iPhone in Canada and allows readers to support the site. Invest at your own risk.