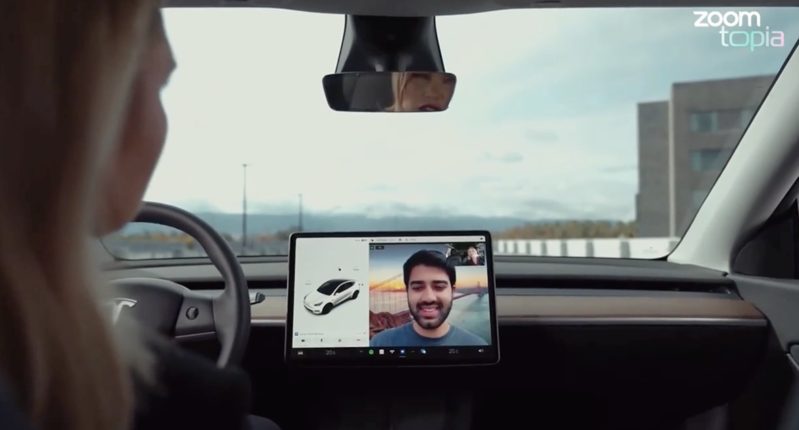 You’ll soon be able to make a Zoom call from your Tesla vehicle. That’s according to Zoom’s announcement today from its Zoomtopia conference down in San Jose, California, reports Tesla North.

According to Zoom, it said all new Tesla vehicles will be able to make calls. A demo of a Zoom call taking place in a Model Y was shown in a teaser clip. We can see the Zoom interface on the right side of the Tesla screen.

As for Zoom in a Tesla, it appears to be leveraging the vehicle’s Cabin Camera that is located above the rear-view mirror. This camera is used by Tesla to track driver attentiveness when Autopilot is enabled, and looks to be the first time we’re seeing this camera being leveraged in an app.

Check out the announcement of the Zoom integration in Tesla vehicles below:

Earlier this year, when Tesla released a video highlighting its new V11 software update, some users spotted the Zoom icon, suggesting the app and integration would be coming soon. Tesla CEO Elon Musk said in May the idea of video conferencing in a Tesla would “definitely” be a “future feature.”

As reported by the folks over at Tesla North, Tesla delivered its first production electric truck to the customer, PepsiCo, at its Semi delivery event on Thursday evening at its Gigafactory in Sparks, Nevada. At the event, CEO Elon Musk was also available for a presentation alongside Dan Priestley, Senior Manager, Semi Truck Engineering. Musk...
Usman Qureshi
19 hours ago