According to the latest data from market research firm Slice Intelligence, Apple Watch online sales in the U.S. are estimated to have totalled 3 million, after three months of the product’s initial launch, MacRumors reports, after obtaining the report from the research company.

The firm has estimated the wearable’s total sale to be 3,039,353 units at an average price of $505 through July 10, with the entry-level Apple Watch Sport being the most popular model. 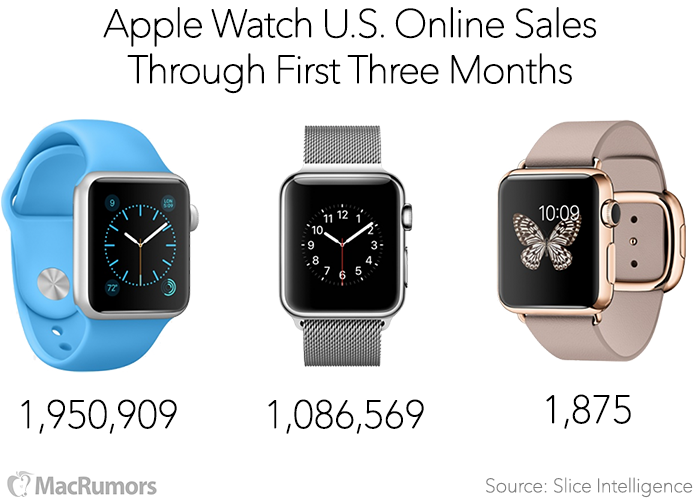 The Apple Watch Sport is believed to have been sold by almost a two-to-one margin, with an estimated 1,950,909 units sold at an average price of $381 since April 10, the day Apple began accepting pre-orders for the device in the U.S. At the same time, the stainless steel Apple Watch sales are estimated at 1,086,569 units to date, at an average price of $695. It must be kept in mind that the data does not account for walk-in purchases made through the Apple Store in the region.

“Apple has also sold 1,875 Apple Watch Edition models to date, at an average price of $13,700, according to Slice Intelligence. The 18-karat gold Apple Watch models, seen on the wrists of celebrities such as Beyonce, Drake, Kanye West, Katy Perry and Pharrell Williams, cost between $10,000 and $17,000 in the U.S. Slice Intelligence’s data does not include Apple Watch sales in Australia, Canada, China, France, Germany, Hong Kong, Italy, Japan, Mexico, Singapore, South Korea, Spain, Switzerland, Taiwan and the United Kingdom”.

Earlier this month, a survey by the same research firm had claimed that June wasn’t the best month for Apple Watch sales, with sales dropping to less than 10,000 per day, from 20,000 per day in the previous month.