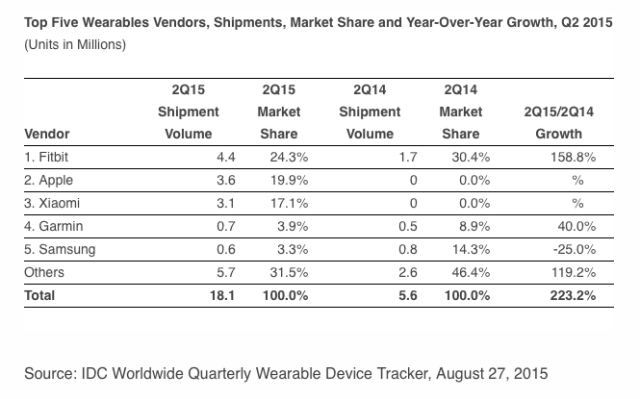 “Anytime Apple enters a new market, not only does it draw attention to itself, but to the market as a whole,” noted Ramon Llamas, Research Manager for IDC’s Wearables team. “Its participation benefits multiple players and platforms within the wearables ecosystem, and ultimately drives total volumes higher. Apple also forces other vendors – especially those that have been part of this market for multiple quarters – to re-evaluate their products and experiences. Fairly or not, Apple will become the stick against which other wearables are measured, and competing vendors need to stay current or ahead of Apple. Now that Apple is officially a part of the wearables market, everyone will be watching to see what other wearable devices it decides to launch, such as smart glasses or hearables.”

Actually, when we separate the wearables market into basic and smart wearables (with the latter meaning devices capable of running third-party applications), we can say the Apple Watch is off to a great start, accounting for two out of every three smart wearables shipped during the second calendar quarter.

As a result, the Apple Watch is poised to grow in the wearables market, and IDC estimates that it will become the next market leader for all wearables. Since Apple stepped into the space, shipments have grown 223.2% year-over-year to 18.1 million units, which compares to the 5.6 million units shipped in the second quarter of 2014.