Apple Watch to Account for Half of Global Smartwatch Shipments in 2016: IDC

Apple will capture nearly half (49.4%) of the global smartwatch market in 2016 according to the latest forecast by the International Data Corporation’s (IDC) Worldwide Quarterly Wearable Device Tracker. The company is predicted to ship 14.1 million units this year, slightly above the 13 million units estimated for last year, which secured about 61.3% of the global smartwatch market for 2015.

The market research firm notes a slowdown in the early part of this year, primarily because customers will hold off buying the existent model in the hope of new hardware coming later in 2016. This won’t, however, hold back Apple from retaining the #1 position in the wearables market. Looking forward, IDC predicts that Apple Watch shipments will reach 31 million units by 2020.

“Although smartwatches like the Apple Watch or Android Wear devices capture the spotlight, they will only account for a quarter of all wearables in 2016 and will grow to about a third by 2020,” said Jitesh Ubrani, Senior Research Analyst for IDC Mobile Device Trackers. “It’s time to start thinking about smarter watches — traditional watches with some sort of fitness or sleep tracking but are unable to run apps—built by classic watch makers. These devices have the potential of making the technology invisible while still integrating themselves within day-to-day activities.

Android Wear remains #2 in the global market, accounting for 21.4% in 2016 with an estimated 6.1 million units shipped during the year.

The third major smartwatch, OS, will be Real-Time Operating System (RTOS), predominantly used as a proprietary operating system but capable of running third-party apps, driven by emerging markets and its use by Chinese ODMs. 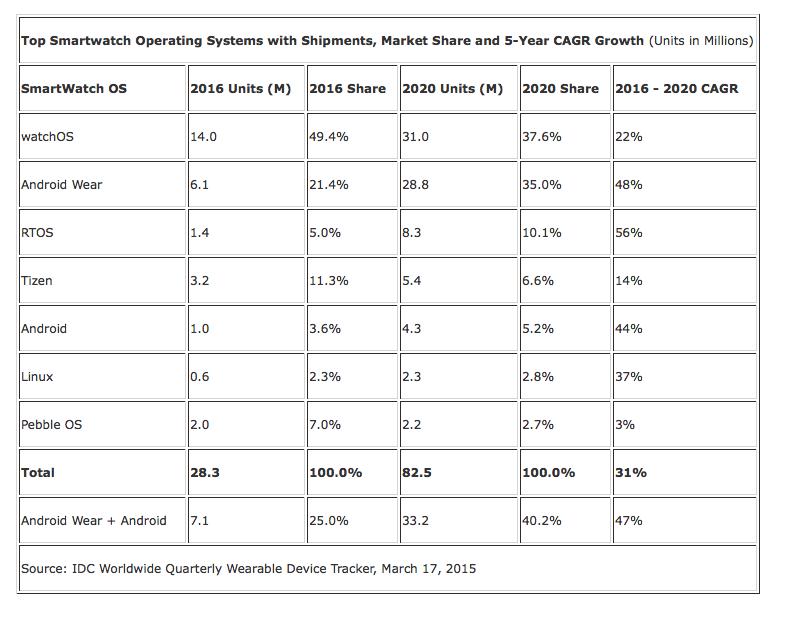 Overall, IDC predicts wearables shipments will reach 110 million by the end of this year, up 38.2% compared to last year. As for the next five years, the firm predicts growing consumer demand culminating in shipments of 237.1 million wearable devices in 2020.