Wearables shipments saw a very strong 171.6% growth in 2015 compared to 2014, thanks to the Apple Watch, the latest report from the International Data Corporation (IDC) Worldwide Quarterly Wearable Device Tracker says.

During the fourth quarter of 2015, Apple grew its Watch distribution, enjoyed holiday promotions, and drove the company’s overall “Other Products” revenue, the market research firm claims. However, holiday sales were up only slightly from the previous quarter: the firm estimates shipments of 4.1 million units for Q4 2015. 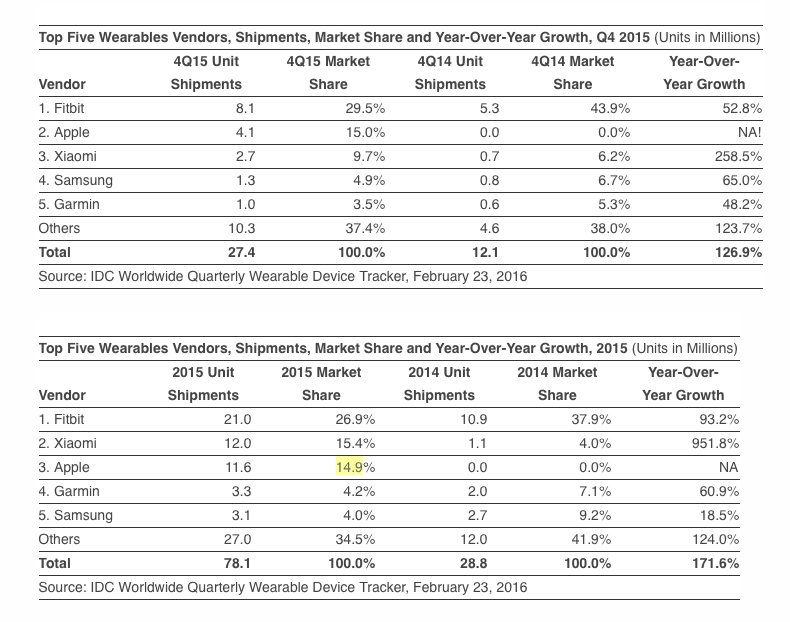 Looking back to the full year of 2015, IDC estimates that Apple shipped a total of 11.6 million Watch units, which puts the company in the third spot with a 14.9% global market share, right after Xiaomi, which is estimated to have shipped 12 million units of its inexpensive wearables.

Samsung has shipped 1.3 million Gear units, which makes the manufacturer the fourth-biggest smart wearables OEM in the world. For calendar 2015, Samsung shipped a total of 3.1 million wearable units, which secured the manufacturer a 4% global market share. Garmin ranks fourth with 3.2 million units, controlling 4.2% of the global wearables market.

“Fashion and design will play an equally important role in increasing adoption,” said Jitesh Ubrani, Senior Research Analyst for IDC Mobile Device Trackers. “Simply encrusting your watch with gold and jewels is not going to cut it. Rather forming partnerships with notable fashion icons, a route taken by Fitbit and Apple, is far more likely to succeed.

“It’s also worth noting that the wearables market isn’t just about smartwatches and fitness bands,” continued Ubrani. “Though the top 5 certainly dominate with wrist-worn devices, there’s been an immense amount of growth in other form factors like clothing, footwear, and eyewear – form factors that arguably require even more fashion sense than watches or bands.”