Apple Watch Series 8 vs Series 7: What are the Differences? 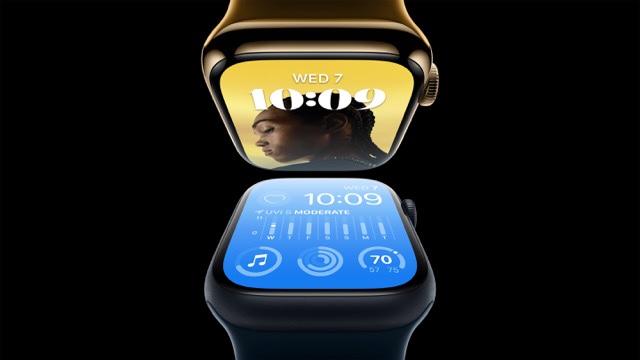 Apple on Wednesday unveiled its latest base Apple Watch, the Series 8. This year’s Series 8 retains the same chassis and overall design as last year’s Series 7, but it does get some upgrades on the inside.

Apple Watch Series 8 versus Series 7: What are the differences?

Both Apple Watch models share the same edge-to-edge display and get equally bright (up to 1,000 nits). They are also both swim-proof (water-resistant 50 meters) and crack-resistant. However, Series 8 is rated for IP6X dust resistance as well.

Apple Watch Series 8 is powered by a new S8 system in a package (SiP), as opposed to the Series 7’s S7 chip. The S8 chip is definitely faster than last year’s S7, but not by much.

Series 8 debuts new Watch faces, like Lunar, Metropolitan, and Modular, along with new features for health, safety, and connectivity.

The hottest new addition is a temperature sensor focused on providing better women’s health tracking. According to Apple, Series 8’s body temperature sensor can be used to more accurately track menstrual cycles and possible cycle deviations. It can even retroactively estimate ovulation dates.

Series 8 uses a hybrid dual-sensor design for body temperature tracking. There’s one sensor on the bottom of the case, touching the wearer’s skin, and another under the display surface to eliminate bias from ambient temperature changes. The sensor takes a reading every 5 seconds, tracking temperature changes down to 0.1°C.

Series 8 is also the first Apple Watch to feature Apple’s Crash Detection functionality. Thanks to an improved 3-axis gyroscope and a new high g-force accelerometer, the latest Apple Watch can detect if you’re in a severe car crash and automatically connect to emergency services and notify contacts.

Barring the new temperature sensor and Crash Detection sensors, the rest of the sensors on both Apple Watch models are identical.

Apple Watch Series 8 introduces a new Low Power Mode, capable of doubling Series 8’s battery to approximately 36 hours on a full charge. However, Low Power Mode is a watchOS 9 feature that is also coming to Series 4 and newer.

Like its predecessor, Series 8 also comes in a 41mm or 45mm case size. The aluminum case option is available in Midnight, Starlight, Silver, and (PRODUCT)RED. On the other hand, you can get a Series 8 with a stainless steel case in Silver, Gold, and Graphite.

Apple Watch Series 8 starts at $529 CAD for the GPS-only version and $659 for the cellular version. Series 8 is available to order today, with deliveries and an official launch scheduled for next week on September 16.

While Series 8 isn’t a massive leap over last year’s Series 7, it is a generational upgrade nonetheless. If you truly want the best Apple Watch money can buy right now (and don’t mind paying almost twice as much), you might want to take a look at the new Apple Watch Ultra.

You can learn more about Apple Watch Series 8 and other available models on Apple.ca.