Tomorrow is the day iPhone OS 3.0 firmware is officially released! Talk about an exciting day that everyone has been anticipating for the longest time. On top of waiting for 3.0, people have been wondering about the state of the iPhone 3G carrier unlock.

Well, yesterday the iPhone Dev Team addressed these concerns by announcing that tonight they will be showing the world a live demo of yellowsn0w for 3.0 firmware! The link for the feed will be tweeted by @MuscleNerd later today. Pretty cool news, eh?

The Dev Team also announced that they are currently updating PwnageTool and QuickPwn, which will work with iTunes 8.2! So that’s right folks, if you’ve been holding off the 8.2 iTunes update, it’s now safe to do install away. Expect the new updated tools to be released within 24 hours of 3.0’s official release.

What about the state of the iPhone 3GS carrier unlock? Well, the team isn’t saying much about that issue. They don’t want Apple to get the upper hand in this ongoing game of cat and mouse.

Here’s a preview of what’s to come! Big thanks to the iPhone Dev Team for all their hard work! 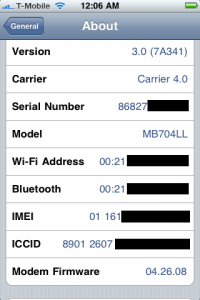