A Detailed Look at How Words With Friends Triumphed Over Scrabble 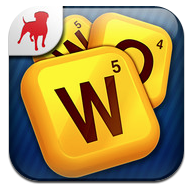 In July, Megan Lawless married Jasper Jasperse, whom she met as a random opponent while playing the Scrabble-like game Words With Friends on her smartphone in 2009. At that time, Lawless, now 32, lived in Chicago while Jasperse, now 31, hailed from Amsterdam.

The couple gradually got to know each other through the game’s chat feature, Lawless tells Fast Company.

Like many Words With Friends players, Lawless has never considered herself a gamer, but she said she loves the word game because “it is about interacting with people …. Like most people, I have friends and family all over the world, and this game allows me to play and chat with those I rarely get a chance to talk to, but I know they are going to play their turn. And it’s fun.”

I was never into Scrabble or word games, but Words With Friends makes it easy to instantly pick up and play. Newtoy has done a fantastic job of eliminating all barriers to entry for newbies and the simplicity of the game makes it appealing. That’s probably why they were gobbled up by Zynga.

If you love Words With Friends you’ll want to read this article–check it out here.

PS – Want to play? My WWF username is: iphoneincanada