Back in mid-April a few credit unions in Canada teamed up to announce the availability of their Deposit Anywhere feature, which allows cheques to be deposited via snaps taken with the iPhone’s camera. Westminster Savings was the first to launch their app, with Meridian Credit Union in Ontario following suit during the first week of May.

Now, Affinity Credit Union in Saskatchewan has finally updated their iPhone app to include the Deposit Anywhere feature, which surely should please its members. The app does not store images of cheques on the iPhone and when members make photo deposits, they are being asked to write a note on the back of the cheque, indicating it was taken using the app. Also, customers are being asked to hold onto their cheques for 60 more days before destroying it.

What’s New in Version 2.0
The new Affinity Mobile app with built-in banking functionality is now available! We have rebuilt the app to provide an iPhone optimized experience to view account balances, pay bills and transfer money between your accounts. Plus, now you can do even more on Affinity Mobile with Deposit Anywhere ™! This new feature allows users to deposit cheques, quickly, easily and securely anywhere, anytime. As well, with our new QuickView feature you will have instant access to your account balances. 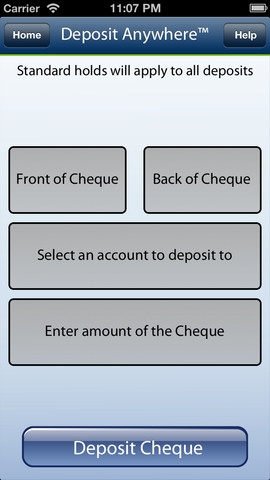 Also known as ‘photo-chequing’, Canada’s ‘Big 6’ banks have been slow to follow suit compared to these three credit unions (and ING Direct from this week). Let’s hope this feature comes soon!