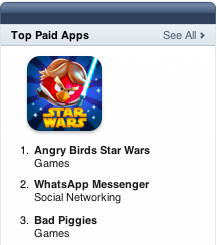 According to Rovio the new game broke previous records by hitting the top spot in the U.S. in only 2.5 hours, which is just insane:

Angry Birds Star Wars made the jump to hyperspace yesterday with a phenomenal launch. Within 2.5 hours of launch, the app soared to #1 in the US iOS App Store, blasting away all of our previous records.

Angry Birds Space broke 20 million downloads in less than a week and was deemed the fastest growing mobile game in the world back in March. Will it be topped by Angry Birds Star Wars? Rovio’s continued success with the franchise has been impressive on all levels.

Did you help contribute to the rise of Angry Birds Star Wars?