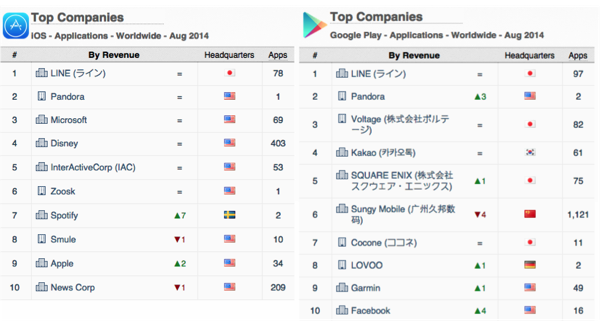 For the first time, (multiple) music app publishers have seen their apps climb to the top of the App Store charts in terms of revenue, the August report from App Annie reveals.

During the past month, music app publishers have seen a spike in revenue rankings thanks to Apple’s in-app purchase system. This helped Apple crack the App Annie iOS top ten companies by revenue list, not with iTunes Radio, but with the recently acquired Beats Music.

As you can see on the above list, Line took the No. 1 spot, followed by Microsoft and Disney, but since our focus is on music apps, we must mention that we are seeing music apps in the top ten list for the first time: Pandora ranked No. 2, Spotify No. 7, and Apple’s Beats, No. 9.

Pandora lost its March No. 1 spot during the past several months. Back then, it was the only music streaming app in the chart, but a couple months ago, Spotify joined the list, and in August, another app is present: Beats, which is now owned by Apple.

Another interesting highlight of the App Annie report is that Facebook took the top positions of both the App Store and Google Play with its apps. Actually, since the social media giant decided to move the chat functionality to a separate Facebook Messenger app, App Annie has noticed a spike in downloads, pushing the latter to the top of the list.