It’s Thursday–so that means another free App of the Week from Apple, and this time it’s Nickelodeon’s Teenage Mutant Ninja Turtles: Rooftop Run, which normally retails for $3.99.

FEATURES
*NEW! Stomp the Foot with the all new hockey mask wearing, butt-kicking vigilante, Casey Jones
*NEW! Shake off enemies while driving Casey’s motorcycle, the Chopper
*Drive the Shellraiser through the streets of New York during vehicle mode
*Jump ramps, crush obstacles and tap to shoot the garbage cannon at oncoming enemies
*Battle hordes of baddies including the Foot Clan, Kraang, Dimension X and Baxter Stockman
*Activate Turtle Time to fight up close in a slow-motion combat sequence
*Outfit the Turtles in exclusive Cyber and Stealth gear
*Upgrade with weapons, gadgets, and boosts like the Laserbot and Turtle Saver
*Unlock and play as the Turtles’ formidable canine foe Dogpound
*Earn rewards from the pizza time mini-game
* Test your skills with new in-game challenges 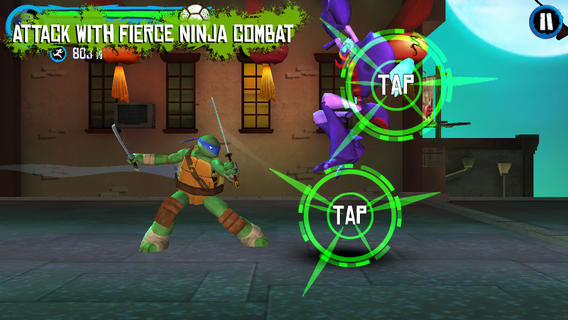 The game debuted last April and should satisfy any TMNT fan—however we found the characters look tiny on the iPhone 5s screen. Nevertheless, it’s still a relatively fun game to try out if you want to kick it old school, but nothing beats the game on NES from the days of 1989.

Click here to download Teenage Mutant Ninja Turtles: Rooftop Run while it’s free for the week. If this game isn’t enough for you, check out the official TMNT Movie iOS app which just launched today for $3.99, also from Nickelodeon.