Apple has shared the top apps of 2016 in the App Store, with the App of the Year award going to free photo editor, Prisma, while Supercell’s Clash Royale took Game of the Year.

The runner-up app was Facebook’s MSQRD, while runner-up game was Reigns. 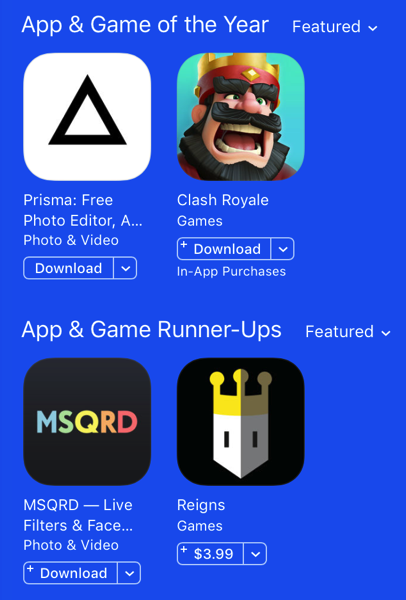 The ‘Breakout Hit’ was Pokemon GO (of course).

For the top iPad app, it was SketchBook Motion, followed by Bear. The top iPad game was Toronto-made Severed followed by runner-up Chameleon Run from Saskatchewan’s Noodlecake Studios.

Here are the ’10 Best Apps of the Year’ as chosen by Apple:

You can check out the full list of top paid, free, and grossing apps here in the App Store.

What are your favourite apps of 2016? Did any of your picks make the year-end list?

November 2016 was a record breaker for the #AppStore – the highest monthly sales ever in App Store history!