Apple Experimenting with Related Search Feature on the App Store [u]

First spotted by TIME Planner developer Olga Osadcha, Apple is testing a “related search” suggestion feature on the App Store, reports MacStories. The feature is available to a limited number of users with an iPhone running iOS 7.

As shown in the image below, a search for Twitter allows users to discover news apps or traffic apps – in other words more apps in the search – by choosing any of the suggestions, which lead to another set of results. 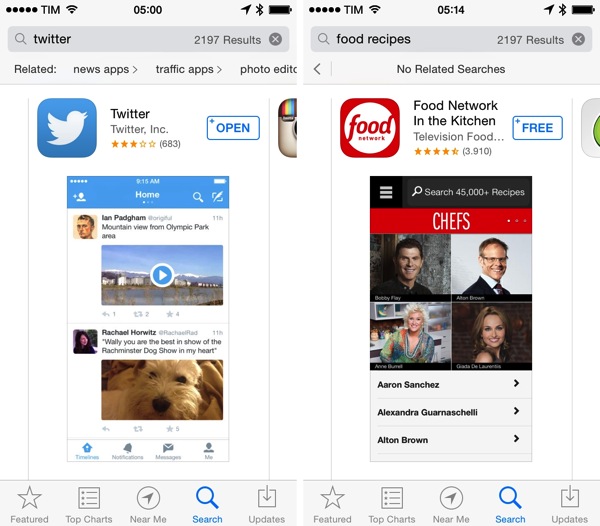 The “related” search option appears on the top of an existing search as a scrollable bar, notes the developer, and allows users to select multiple suggestions in a single session. For example, searching for “indie games” will result in suggestions such as “action games”, with the latter including “action RPG” in the suggestion.

As the App Store grows, app discovery gets harder, and this move is Apple’s first aimed at enhancing App Store search results with visual semantics for apps. It is not yet clear if this feature is based on Apple’s curation efforts – see custom sections, keywords associated by developers to their apps, etc. – but the first tests performed by Federico Vittici of MacStories reveal that the catalogue of curated sections, called Collections, don’t appear to be the primary source of search suggestions.

Update: Apple has confirmed to CNET they are indeed working on this feature and the release is coming next week:

An Apple spokesperson confirmed to CNET on Tuesday that the feature is indeed new and will be rolling out to all users by the end of the week.