Day 4 of Apple’s 12 Days of Christmas promotion is the novel The Red Pole of Macau by author Ian Hamilton:

The “cool and stylish heroine kicks it up a notch” (Terry Fallis, author of Best Laid Plans), in the gripping fourth installment of Ian Hamilton’s Ava Lee Series.

In The Red Pole of Macau, Ava’s half-brother Michael is desperate to pull out of a multi-million-dollar real estate deal in the territory of Macau. The developers are threatening to halt construction unless Michael and his business partner put up another $80 million; the bank is looking for repayment on their loan; and her father is prepared to sell everything to protect his first-born son.

When Ava enlists Uncle for help, she discovers his health is failing and is forced to turn to a former client, the cunning and seductive May Ling Wong. As Ava follows the money trail, she finds herself drawn deeper and deeper into Hong Kong’s dark and deadly world of organized crime.

Will Ava protect her family’s future? Or will this job lead to a violent end . . . 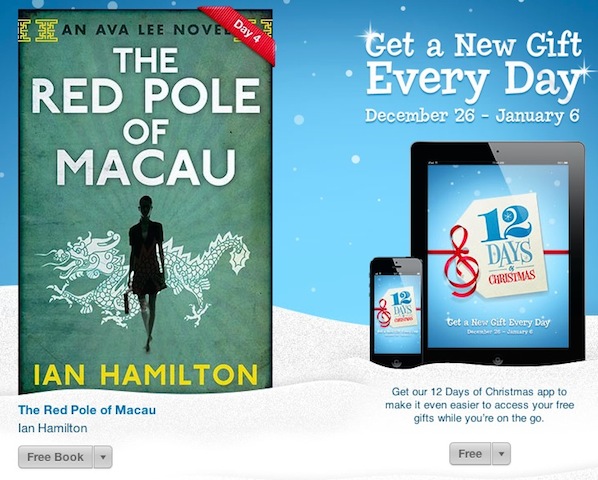 The free book is available in the iBookstore and comes in at 400 pages, a 1.6MB download. Let us know if you’re a fan of this Ian Hamilton series around Ava Lee.