It’s a new week and that means a new App of the Week from Apple. This week’s choice is Solar Walk, a 3D solar system model. The is regularly priced at $0.99 cents and was previously featured by Apple as the Best Apps of 2010 and 2011. It’s a 3D solar system model that will let you get in close and personal plus it also includes images of satellites too.

MAIN FEATURES:
• GALAXY view – absolutely magical zoom out to view the whole galaxy option.
• TIME MACHINE – set any date you want including even minutes and take a travel through space and time.
• MOVIES – explanatory movie collection about the Earth’s phenomena.
• SATELLITES – real-time trajectories of the most interesting artificial Earth’s satellites.
• LOCATIONS – arrow will show your current position on the globe, plus names of the biggest cities of the Earth, as well as sights of the Moon, Mars and Venus.
• INFO about all planets – general info, its name, its mass, radius, distance to the sun, internal structure with the picture and science missions.
• MOONS of DIFFERENT PLANETS: select a planet like Earth, Saturn, Jupiter, Mars or Urano and observe how many moons they have and their track around the planet. Select one of the moons and learn.
– MIRRORING – wirelessly mirror the screen to an Apple TV 2. 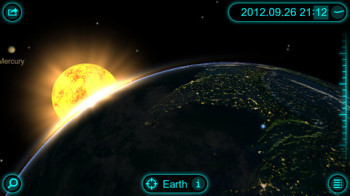 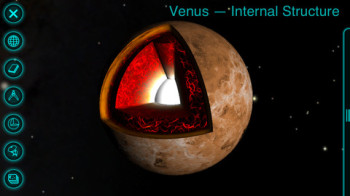 Looks like a pretty cool app, we’re going to check this out now. If we only had 3D stuff like this growing up, eh? I can see lots of kids enjoying Solar Walk.