For fans of the CBC, their previous iOS app was originally released exclusively for the iPad. Today, that has changed in their 3.0 update as it now brings support for the iPhone and iPod touch.

The app allows users to watch full-length episodes of your favourite CBC programs, along with TV schedules and support for AirPlay via your iPhone:

What’s New in Version 3.0
– CBC TV App is now also available on iPhone/iPod touch
*** Enjoy the hottest CBC programs right on your iPhone, including Heartland, Dragons’ Den, Republic of Doyle, Best Recipes Ever, Little Mosque on the Prairie, Rick Mercer Report and more
*** Browse the CBC Television schedule at the touch of a button from home, work or commute
*** Stream your favorite shows on your big screen directly from your iPhone via AirPlay
– Simplified sharing options (email, Twitter, Facebook) 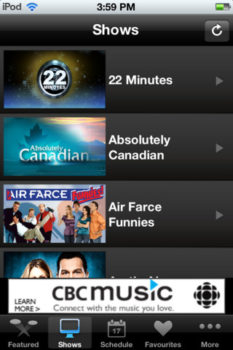 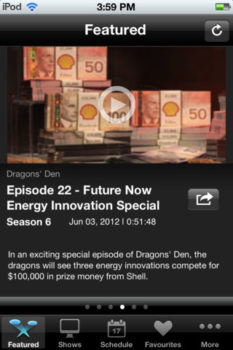 Click here to download the CBC TV iOS App–it’s free. Let us know if the AirPlay works for you, as some people have mentioned it’s not supported.

Thanks for the tip @shawnrouse!