For Discovery Channel Canada fans, you’ll be pleased to know there is now an official iOS app to download for your iPhone, iPad and iPod touch. This app has a huge social feature where it will allow users to get interactive during select live broadcasts, such as moderated chat, along with polls and trivia games.

The app also features Video On Demand for Discovery shows such as Daily Planet and Deadliest Catch, which can be streamed to your Apple TV via AirPlay. Users can also bookmark favourite episodes, share their shows on social networks and also check out local Discovery broadcast schedules.

“The Discovery Channel App offers even more ways for Discovery’s always-curious audience to engage with our content,” said Paul Lewis, President and General Manager, Discovery Channel Canada. “We know our audience has an insatiable appetite for all things Discovery and the app gives us a new way to provide, share and engage our loyal fans with show-specific, audience-centric extensions of Discovery Channel programming.” 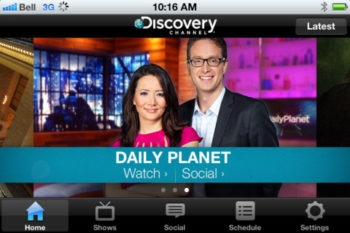 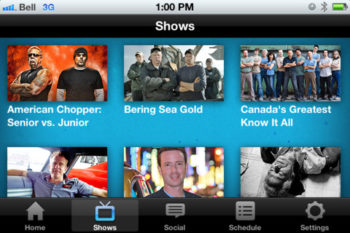 Do note this is a new 2.0 version of the old app, and has been noted as ‘new and improved’ compared to before, when the app was a bit outdated and stale. The app is brought to you by Bell Media. Let us know how you like this new update.