EA Launches FIFA 14 in the App Store as Free Download

EA first announced the game would be free on iOS and Android back in late-August.

REAL PLAYERS. REAL TEAMS. REAL LEAGUES. Welcome to the most authentic football game on the App Store. Feel the excitement of every pass, shot, and tackle with new touch controls. Plus, live every moment of real-world football mastery with EA SPORTS™ Football Club Match Day. Get in there!

** This is a highly detailed game of superior quality. Please make sure you have at least 1.35GB of free space on your device. **

FEEL THE PASSION
Featuring 33 leagues, over 600 licensed teams, and more than 16,000 players. From the English Premier League and La Liga to the German Bundesliga and beyond. March toward glory in 34 authentic stadiums. Plus, for the first time on mobile, listen to commentaries in English, French, German, Italian and Spanish! 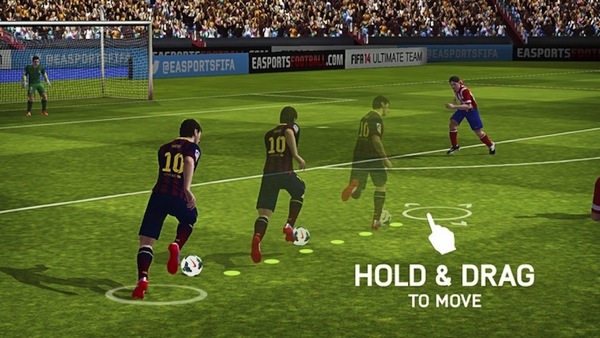 FIFA 14 also features 14 commentaries in five different languages (English, French, Italian, German and Spanish). With its new touch controls and online multiplayer, this looks like one fun game for any football fan.

Today also marks the North American launch of FIFA 14 on Xbox 360, PlayStation 3, Windows PC and PlayStation Vita. EA says a record 5 million fans downloaded the console demo of the game when it was released two weeks ago. So far, early reviews in iTunes have been quite positive. Let us know how you’re liking the game!