TinyCo has released Family Guy: The Quest for Stuff, a game based on the hit animated TV series that’s available in the App Store now as a freemium title.

It’s Free! Freakin’ free? Freakin’ sweet!
• Create a living Quahog that fits enjoyably in your pants
• Unlock hilarious outfits for your characters like Mermaid Peter, Bikini-Clad Quagmire, and Rambo Lois
• Send your characters on ridiculous quests
• Keep Quahog safe from pirates, evil chickens, and other invasions
• Peterfy your town with decorations such as The Petercopter, The Peterdactyl, and The Hindenpeter
• Unlock hundreds of brand new and classic animations 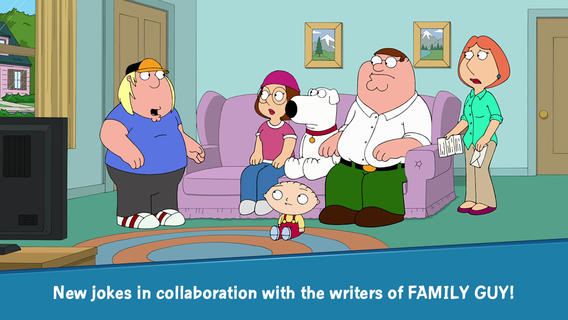 In an interview with Fast Company, Matt McMahon, VP of mobile for Fox Digital Entertainment, said they are trying to “push the envelope” with this new app:

“With these applications, we’re looking to drive new business, and create an ongoing engagement platform for fans—not just by putting promotional brands in the game, but integrating storylines from the franchise,”

He goes on to say something from an episode will be put into the game on a Wednesday before new episodes air on Sundays, allowing viewers to interact with a pre-release before it goes to air. The new TV episode will promote itself back into the game, allowing users to continue the storyline from there. The plan is to tie in at least two episodes a month into the game.

There’s more to this integration though, as it will possibly include advertisers in the future. However, the team says they won’t force it onto users but rather try to do it organically.