For those not familiar with Fongo (formerly Dell Voice), it provides users with a free local Canadian phone number and allows you to make unlimited free VoIP calls to most areas in Canada no matter where you are in the world. Other features include text messaging, voicemail, caller ID, call waiting and call forwarding.

“We’ve powered over 500 million minutes of free calling for Canadians and this expansion is part of our goal to extend Fongo to every corner of the country,” said Dave Bullock, president of Fongo Inc. “People in Peterborough, Owen Sound, and 30 other cities can now get a free local number in their city and talk freely from coast-to-coast.” 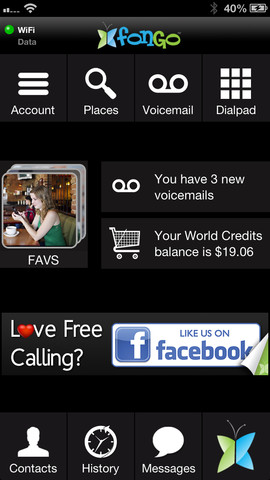 The free Fongo app was recently updated to improve battery life and other speed enhancements, plus the ability to change to a lighter themed skin. The app works over Wi-Fi and 3G networks, with each minute of usage using 0.5MB of data per calling minute. If your monthly plan doesn’t have a lot of daytime minutes or a long distance plan, Fongo might be a solution for you.

As for new local phone numbers, users in Campbellford, Durham, Owen Sound, Peterborough, and Walkerton can now get their own local numbers. You can check out the following list of cities where Fongo provides numbers here.

The Fongo app was given a major makeover last November and the company notes it continues to be Canada’s fastest growing mobile telecommunications company.