Gmails for iOS has received an update to allow users to swipe between messages without returning to the inbox, plus better management when it comes to dealing with multiples messages. The new, revised actions menu can let you move, label, mute, report spam and mark as unread multiple emails with better ease.

What’s New in Version 2.1
• Swipe left or right to move between messages without returning to the inbox
• Take action on multiple messages more quickly: Selecting a message in the inbox now enables edit mode. Once in edit mode, tap on messages to select them and then choose to archive, delete, or more, from the new actions bar. You may select Cancel at any time to leave edit mode.

And of course: performance improvements and bug fixes

We tested this new update and it’s pretty great. Swiping to the left reveals a snippet of your upcoming message and upon completion the entire email loads on the screen. The new actions menu is also much appreciated for power Gmail users. 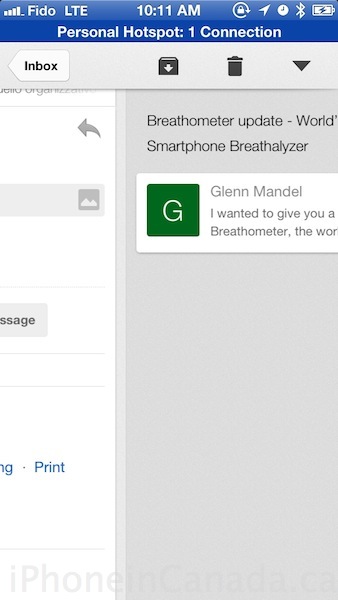 Click here to download Gmail for iOS–it’s free. Earlier in March, Google updated the Gmail mobile web interface to bring the design in line with the iOS app.