The return of Google Maps for iOS, that saw over 10 million downloads in less than two days of its launch, is being praised as “better than ever”. In fact, Walt Mossberg from AllThingsD  believes the app is even better in most respects on the iPhone than it is on the Android. 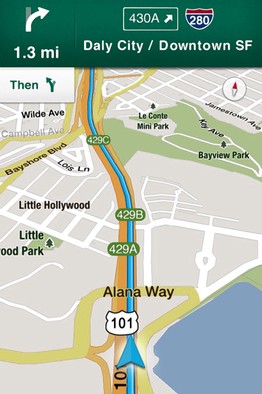 Google has re-designed its maps app for iOS from group up, with a cleaner, simpler UI that makes it easier to use. As opposed to the Android version which features too many menus and steps to get things done, the iPhone version of Google Maps has uncluttered the map itself, with vertical and horizontal swiping to move quickly among places, map views and information. It even enhances the voice-prompted, automatic turn-by-turn navigation.

Though the app misses a few features from the Android version such as maps of the interiors of stores, malls and airports, bicycling directions, the ability to view map segments offline and special offers that show up for some businesses, Google says it left these out for now because they aren’t heavily used. The company officials added that these features may however be added to iOS over time.

“I’ve been testing the new Google Maps on iPhone for a week or so in the San Francisco and Washington metro areas, and I really like it. It isn’t perfect, but I prefer it to any other iPhone Maps app I’ve used, and to Google Maps on Android. The latter will likely also gain the new design in time, but for now, it looks inelegant by comparison.

Why would Google bail out iPhone users and give its rival’s phone a better version of its Maps app than its own Android customers enjoy, even temporarily? Because, while Apple makes its money from hardware, Google is a services and advertising company, and wants its products to be heavily used on a popular platform like Apple’s”.

Check out Mossberg’s review of Google Maps for iOS: