Google has updated their search app for iOS to bring 3D Touch support for iPhone 6s users. The shortcut enables quick access to image, voice and quick searches. Also new is the ability for multitasking on the iPad, to allow the app to run side-by-side on supported models.

Search results also now include holiday hours, plus data on when stores are at their busiest, so you can avoid the crowds.

What’s New in Version 11.0
• 3D touch integration on iPhone 6s devices— hard press on the app icon to bring up quick shortcuts for search, voice search, and image search.
• Multitasking on iPad—use the Google app side-by-side with your other apps
• Search results for places and local businesses now include holiday hours and info on the busiest times of the day to help you avoid the crowds.

Try saying “what time does the nearest mall close” or “show me Starbucks nearby” and tap on the result to see how busy it gets throughout the day.

Below is a screenshot of the 3D Touch shortcuts, which actually are very handy: 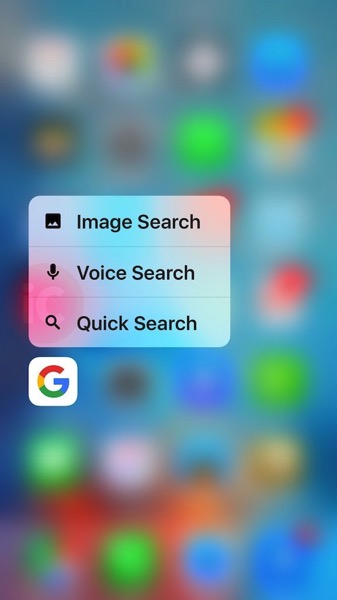