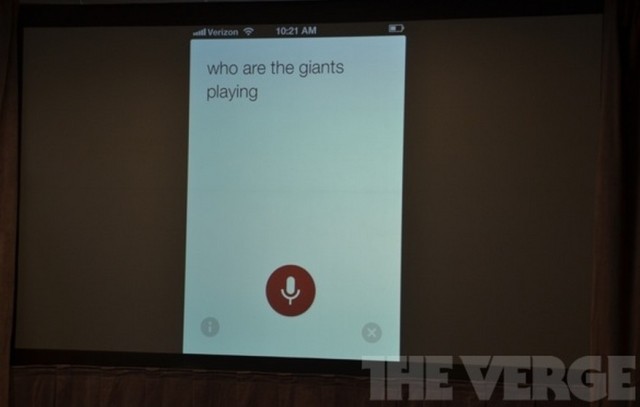 Google has announced today the launch of their Knowledge Graph in Canada and around the world. The Knowledge Graph is described as “more than 500 million real-world people, places and things with 3.5 billion attributes and connections among them”.

On top of this announcement, Google also noted an upcoming update of the Google Search iOS app will soon include improvements to the Voice Search feature, so it will be able to answer questions when asked:

Often the most natural way to ask a question is by asking aloud. So we’ve combined our speech recognition expertise, understanding of language and the Knowledge Graph so that Voice Search can better interpret your questions and sometimes speak the answers back as full sentences. This has been available on Android for a few weeks and people love it. It’ll soon be available on youriPhone or iPad (iOS version 4.2+).

You just need to tap the microphone icon and ask your question, the same way you’d ask a friend. For example, ask “What movies are playing this weekend?” and you’ll see your words streamed back to you quickly as you speak. Then Google will show you a list of the latest movies in theaters near you, with schedules and even trailers. It works for everything from celebrity factoids to the height of Kilamanjaro and more. When Google can supply a direct answer to your question, you’ll get a spoken response too.

Here’s a video demo of the upcoming voice capabilities of Voice Search:

The new Voice Search has been available to Android users for a while now, but soon it will come to iOS. With Apple slowly removing Google integration within iOS, Google will have to continue to fight to keep iPhone users glued to its services. The Verge reports the app update will be available in ‘a couple of days’ according to Google.

Voice Search was first announced way back in November 2008, when the app was formerly known as Google Mobile. The change to Google Search came in March of last year.