Popular last-minute hotel booking service Hotel Tonight has announced the availability of its apps for iPhone, iPad, iPod touch as well as Android in Canada with initial hotel offerings in Toronto and Vancouver, reports Market Watch. The company is planning to expand its international reach, launching in additional Canadian cities and new international markets over the coming year. The Apps offer three same-day hotel deals in each of its destinations, with discounts of up to 70%. All hotels are personally vetted by Hotel Tonight staff and illustrated by mobile-optimized hotel photos.

Book awesome same-day hotel rooms for up to 70% off.

Download now & redeem this exclusive App Store promo code for $25 (or £15 or €20) off your first booking. Promo code: TONIGHTFEATURES

? Exclusive, astonishingly LOW PRICES on incredible hotels we personally vet.
? Same-day, FAST AND EASY bookings until 2am!
? Up to 3 GREAT DEALS each night in a growing list of cities.
? We limit the deal selection so we can negotiate with hotels to get you the BEST RATES possible.

* We’re now in Canada (Toronto & Vancouver)! First step toward international domination: complete.
* Change your currency and see rates displayed in £, €, $ or $ (that’s USD and CAD, not a typo). 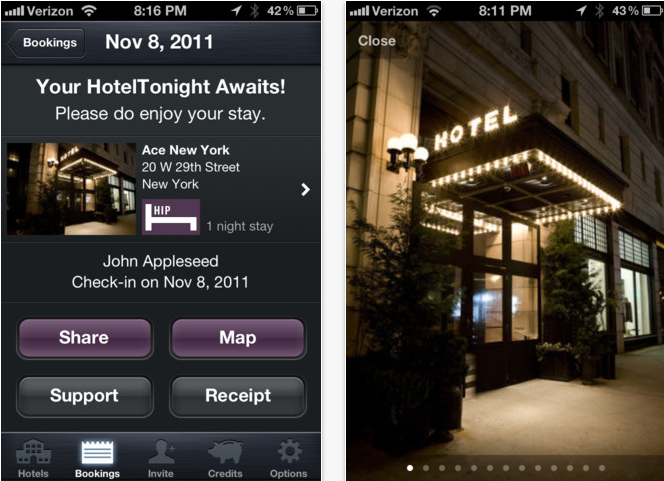 The app is available as a free download on the App Store as a universal download for iPhone / iPod and the iPad.