Grooveshark has announced a revised HTML5 web app to stream their library of 15 million songs, which works on iOS devices and also plays in the background. Back in May, we noted the initial release of this HTML5 player to circumvent the App Store and Google Play, where the app is banned (it is available in Cydia though).

“With Apple and Android blocking us from app stores, we really had no options until this HTML5 release…

…The only way to block the HTML5 Grooveshark is if the Internet goes down.”

Testing out the web app, it works fine here in Canada and also plays in the background. There are a few aesthetic improvements to the interface but aside from that, it works pretty much as advertised. 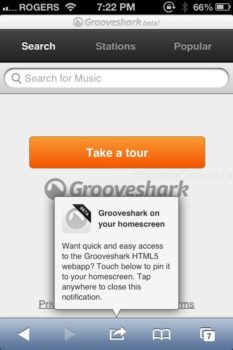 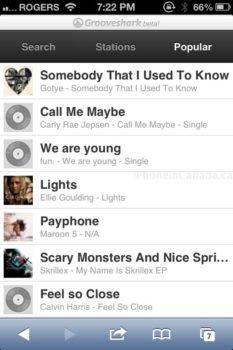 You can check out Grooveshark here from your iOS device. It’ll ask you to save the beta HTML5 web player to your home screen for easy access.

Let me know if you are using Grooveshark. Other recent music alternatives include Songza, which is equally as awesome, but has a native app.