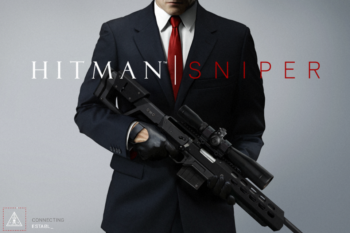 While looking for my mark I saw a guard stand by the hot tub. So I zoomed in close, lined up the headshot, fired and watched the bullet drop him into the tub. Body disposed. That is until a women noticed, alerted my mark and forced me to franticly try and shoot him as he ran away… 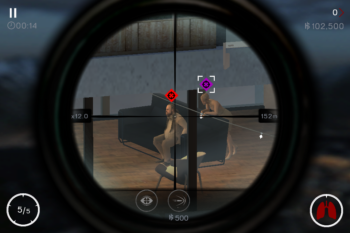 I have you now

Hitman: Sniper is a sniper assassination game from the developers of Hitman GO. When on missions you stand above and a few hundred meters away from a villa in Montenegro while your targets go about their evening. Each mission ends when you assassinate the main target, but before you do that you have one other main objective, such as score 100,000 points by shooting guards, and two bonus objectives to complete, such as get a moving headshot. Completing these missions earns you rewards, such as XP that levels up your sniper rifle and money so you can buy upgrades. You can also buy in-app purchases to get these upgrades sooner. 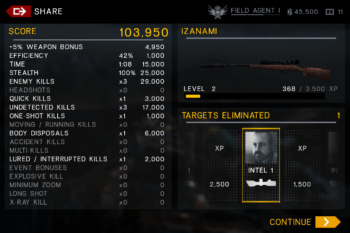 There are a lot of metrics that go into your score, which you can compare with friends via the leaderboard and Facebook

What I had the most trouble with was hitting targets. Part of this was by design, where I was leading my moving targets wrong, but the other part was the finicky controls. There were a few times I was trying to move the crosshairs into position but I ended up shooting or zooming to some other part of the map instead. If I was really careful I could manage, but if I tried to move too far too quickly I lost control. There were icons that appeared around my scope that would take me right to my mark or the alerted guards, but if there were a bunch of icons it was difficult to tap the right one on my iPhone 4S.

However, what I found most disappointing was that there was only one level, which makes the game very repetitive. Hopefully, more will appear when the is game released internationally, as right now only Canada gets to partake in the soft launch. Hitman Sniper is made by Square Enix’s Montreal office. 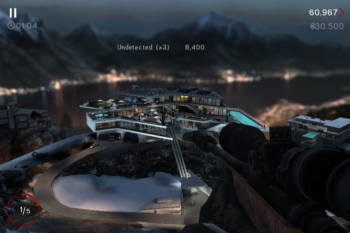 I hope you like the view, because that’s all there is right now

Hitman: Sniper is a different challenge than Hitman GO, but it you are a fan of Hitman, sniping or complex puzzles you can download it for free from the App Store. Then tell us which Hitman game you prefer.

Update: Looks like the app has been pulled from the Canadian App Store, oddly enough.