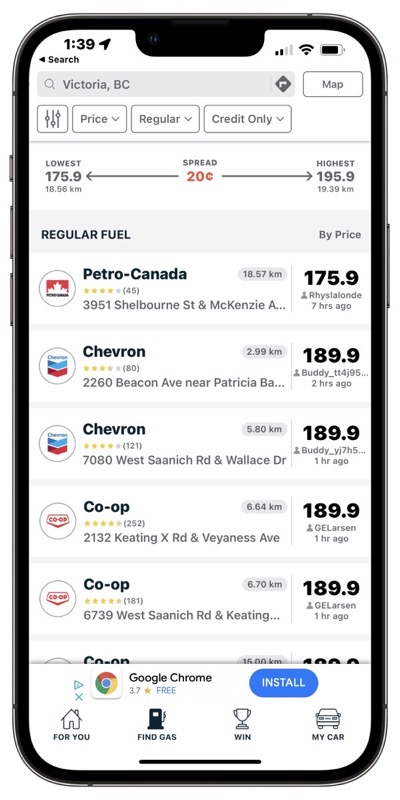 With rising inflation and now the invasion of Ukraine by Russia, gas prices have risen to record highs in Canada and throughout the world.

In Canada, gas prices hit a record high of 194.9 cents per litre in Victoria, B.C. as of yesterday, before settling down to 189.9 cents on Thursday at various gas stations.

If you’re looking to find the best gas prices near you in Canada, the best way at the moment is likely the GasBuddy app for iOS and Android, which relies on its users to update prices in real-time for the community. Think of it as Waze but for gas prices.

GasBuddy currently tracks over 150,000 gas stations in Canada and the USA.

According to Patrick De Haan, Head of Petroleum Analysis at GasBuddy, he said on Thursday morning the app “is indeed busy and struggling under the weight of crazy #gasprices. Our team is all over it and trying to restore ASAP.”

De Haan also added, “Vancouver, BC gas prices will hit $2/litre in the next 72 hours, the first time Canada has seen $2.”

Vancouver, BC gas prices will hit $2/litre in the next 72 hours, the first time Canada has seen $2

B.C. is set to increase its carbon tax by 1 cent at gas pumps starting April 1, so that will add to already higher prices.

Thursday also saw a record in the U.S., as for the first time, a city has breached the $5 per gallon average, with the feat achieved in San Francisco, according to De Haan.

Unless you’re driving an electric vehicle, it’s next to impossible to avoid rising gas prices. Places like Costco with slightly discounted gas are seeing some huge lineups.

GasBuddy is a free app to download and is powered by ads. The app asks you to use your location data to find gas prices near you. The iOS app does support Sign in with Apple, so you don’t need to bother creating an account.