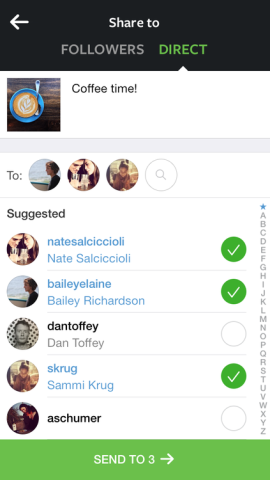 In line with previous rumours, Instagram has added a messaging feature to its app called Instagram Direct. The feature was introduced today during an event held in New York City.

Adding a messaging option to the app isn’t quite a new idea, but CEO Kevin Systrom qualified this by saying, “Communication is not about photography, necessarily.” Instagram however, hasn’t lost its previous focus on “moments”, but enhanced the app by added another dimension, and that is real-time communication. While highlighting the new feature, the promo video also shows that Instagram was careful not to lose the magic of moments.

Instagram Direct allows users to share a photo or video with their friends right after the editing process. The maximum number of recipients is 15. The messaging feature comes in after the image is sent.

After launching the updated app, Instagram Direct will appear as a new icon in the top-right corner of the user’s home feed. This is where users can check the photos they have received. To share an Instagram moment with specific people, users will be able to choose ‘Direct’ after they have finished editing the image.

Instagram Direct will also display information about who’s seen the image or video, who liked it, and then the conversation kicks off.

The new feature comes with Instagram 5.0, which is already available in the App Store.