Apple has released an update for the iTunes Festival iOS app, ahead of the music festival set to launch at SXSW next week at the Moody Theatre in Austin, Texas. The app gets a refreshed design which details featured artists and the concert’s line up. 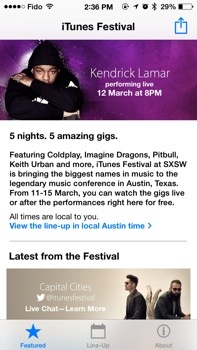 Earlier this week it was reported iOS 7.1 would drop from Apple ahead of the updated iTunes Festival app, seen as a requirement but today that has turned out to be false.

Once the iTunes Festival begins, expect the channel to also appear on Apple TV as just one more way to watch live concerts for free from Apple.