Bell has announced their Mobile TV arm will now include Whitecaps FC games, to kick off the 2012 MLS season, which has the Montreal Impact visiting BC Place tomorrow:

“As Premier Founding Partner, Bell is proud to offer Vancouver Whitecaps FC fans access to their favourite team on our innovative and industry-leading Bell Mobile TV service,” said Wade Oosterman, President of Bell Mobility and Bell Residential Services, and Bell’s Chief Brand Officer. “With every minute of every exciting match delivered live to our fans on the screens of their choice, Bell just made being a Whitecaps FC fan even better.”

“We promised Whitecaps FC fans that we would provide a unique experience to let them share the passion of Major League Soccer,” said Rachel Lewis, Chief Operating Officer, Vancouver Whitecaps FC. “Again, thanks to our partner Bell, we’re continuing to deliver on that promise across multiple screens.” 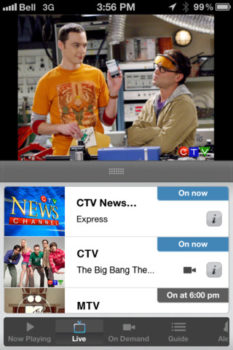 Also available on the Bell Mobile TV iOS app will be NCAA March Madness games, starting March 13 – April 2. Users pay $5 to view 5 hours of TV viewing within the app over 3G, but unlimited over WiFi. Anyone using Bell Mobile TV?