Mailbox yesterday suffered its first outage and dealt with intermittent issues forcing them to pause their reservations line. The company notes yesterday’s outage was related to “infrastructure limits” and they have since lowered the rate at which reservations are filled to help keep service online.

The service has since been back up to speed as of late yesterday and Mailbox has provided some numbers on their first week of going live. The first day they filled 1000 reservations and as of last night they filled #150,000. They have also delivered 50 million emails and inbox zero has been reached 400,000 times. 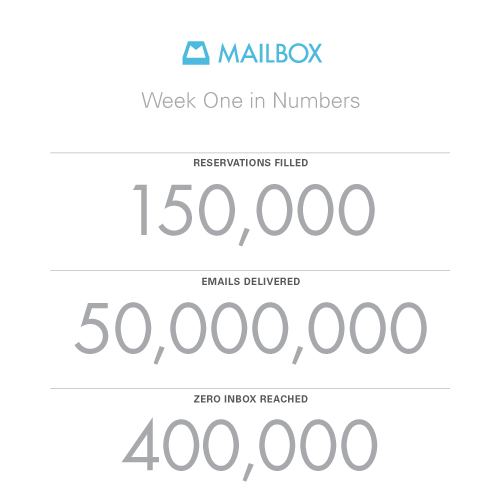 After using Mailbox for the past week I’ve found myself still jumping back to Gmail for iOS periodically due to its support for replying from multiple accounts within one inbox. Mailbox does have a speed advantage when it comes to loading emails and also push notifications, plus it still is great for managing emails that come into the inbox. Do you have Mailbox yet? What do you think of it so far?