New iOS email app Mailbox is currently suffering from downtime, as users have been faced with the following message when they attempt to check email: 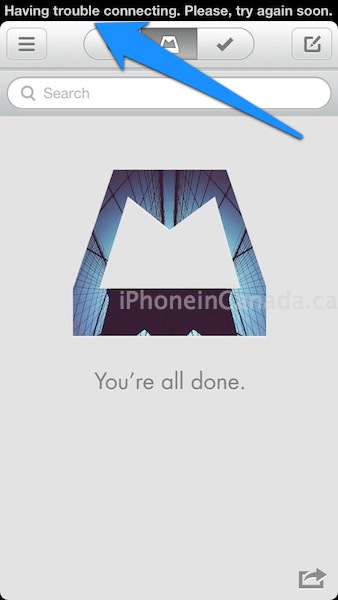 As we stated in our review of Mailbox, the app is a fresh look at how to conquer your inbox. The company issued a creative way to rollout the app by using a creative yet controversial reservations system, which they explained was the only way to scale the app to users–without suffering downtime.

Mailbox has just posted an update to the situation saying they are currently experiencing intermittent issues and have paused reservations in the meantime.

We’re currently seeing intermittent issues with our servers syncing mail. We’ve paused filling reservations so that we can focus on a fix.

If you’re currently using Mailbox, you’re most likely seeing a message that says “Having trouble connecting, please try again soon.” Don’t worry, any messages that you take action on or any new emails you create should not be lost. Once we have resolved the issue your Mailbox will simply update and process all actions you’ve taken inside the app.

Is Mailbox working for you (that is if you’re not waiting for it still)?