Apple’s free App of the Week is MarcoPolo Ocean, an educational app for your kids to learn about the ocean, marine life and more. The app is geared towards preschoolers to allow them to build and explore their own ocean environment, and learn a bunch of new vocabulary, animals and more in the process.

Make dolphins jump. Build a coral reef. Explore the deep sea. Create your own aquarium. These are just some of the fun things you can do with MarcoPolo Ocean, a “digital sandbox” for kids to play in that sparks their interest in the most unexplored part of our planet – the ocean.

Build and Explore
Six build-and-play activities bring the language and the images of the ocean to life. Ocean is playfully narrated and animated to reinforce vocabulary, physical attributes and ocean concepts.

The game is very popular in iTunes, garnering an average 4.5 out of 5 rating from 56 reviews. For 16GB iPad users, beware the 202MB initial download will end up to 1.2GB after extra resources are downloaded, according to one iTunes review. 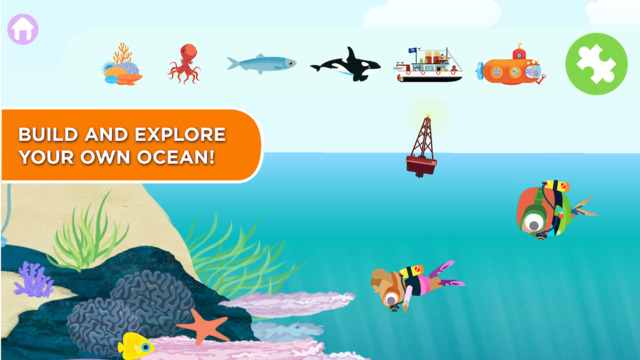